I played a lot of games this year, including plenty of 2015 releases that couldn't make it in my top 10. I briefly want to acknowledge a few of those as this was easily the most excited I've been about video games in quite some time. This year was just great for the medium all around.

Mortal Kombat X - More of the same after the wonderful MK9 reboot, MKX was still a blast to play, with a decent story mode and surprisingly fun, new characters.

Crypt of the Necrodancer - A truly unique spin on the roguelike-like genre using beat-matching to an amazing soundtrack in order to move and attack enemies. This game is hard - I still haven't beat it, and honestly haven't devoted enough time to it.

Massive Chalice - I love that I failed to finish this game. Literally - I made it to the final battle and my kingdom was too weak and I liked that. The time mechanic was fascinating and expertly done and I couldn't stop playing all the way til the end.

Rocket League - This soccer-game-with-cars is so fun to play and its simplicity is beautiful. I will most likely have this on my 2016 GOTY when I can play it on Xbox One with more friends.

Volume - Volume takes the old form of Metal Gear Solid stealth and makes it a puzzle game. The simplistic art worked much better than I expected and the desire to speed run levels recalled my ultimate love: Super Meat Boy. Perfect.

Downwell - Another roguelike-like that managed to deliver a new mechanic in a sea of similar titles. Fast, frantic, difficult and makes a tri-color palette look great in a modern age.

Fallout 4 - Fuck this game. No seriously - I love Fallout 4 and played it for days, but it has no place in 2015. Bethesda has a lot to prove to me as a long time fan with their next game.

Soma - This is easily the most interesting thing I experienced this year. I played only a bit myself and opted to watch a Let's Play as I seriously hate the "hide from enemy" mechanic that caused me to never finish Amnesia: The Dark Descent. Soma is disturbing in an almost too real way - evoking not only a minor existential crisis from me, but also making me think about our future downfall to artificial intelligence in a way I never considered. There were a few story beats where my mouth was agape, horrified at what I was witnessing. This is truly a must-experience story for any fan of science fiction, whether playing it or watching someone else play it. The setting, art direction and voice acting really nailed the themes presented. Soma poses questions that any human should consider at some point in their lives and I'm pleased that a simple video game furthered my understanding of difficult subjects.

Can you believe there's 10 more games I loved this year?

It goes without saying that the Souls series does something special for me. DS2 was my 2014 GOTY and still made its way to this list. SotFS is technically a 2015 release and deserves some credit for refining the jumbled mess of the original and including 3 hearty, difficult content packs. DS2 is a straight dungeon crawler where I wasn't looking for narrative - I just wanted more scenarios to bang my head against with a ton of different playstyles. I dumped hours and hours into this title again. This is a great package and that 60 frames per second really goes a long, long way.

I'm glad this game made its official release this year, because I played a whole lot of it. I'm not a car enthusiast in any way, and in fact, despise actual driving in real life. But rally games have always held my attention due to the focus on time trials. Dirt Rally is a return to Codemasters' previous experience with rally simulations where there's no flashy X-games events, just straight point to point racing (and some other stuff too). Every turn or bump in the road can spell disaster in a split second, making Dirt Rally a thrilling ride. As my first Early Access experience also, it was great to see how much Codemasters listened to the fans while also continually delivering new content. There's a lot to do here for any racing game fan - look for this game to come to consoles in 2016.

Rare Replay is a lot of games in a single package and was one of my favorite releases this year. Rare really hit their stride with me during the N64 era where I was just old enough to voraciously consume video games. Much of my feeling for this package is based purely on nostalgia, but this collection also added some fun, extra morsels to squeeze out more enjoyment from very dated games. The snapshot challenges, milestones/stickers that are achievements I actually want to pursue, unlocking "making of" featurettes and getting to experience the few Rare games that I actually missed (there is some genius in those ZX Spectrum games!), made this $30 well worth spending. Also, this is my last legitimate chance to have Banjo Kazooie: Nuts & Bolts on a game of the year list. Why haven't you played Nuts & Bolts yet?

#7 - Tales From the Borderlands

One free episode convinced me to immediately purchase the season of Tales. I like the Borderlands games but never would have guessed a narrative focus set in the same universe could be so damn fun. I was down on this idea from TellTale the minute it was announced but the lighthearted-while-grim subject matter of Borderlands was captured perfectly by the characters and plot. I felt connected to everyone and the decisions felt impactful. The engine of these games needs a massive overhaul but I was so wrapped up in the story that I didn't mind. Tales is the one game on this list that lived and died by the story - and it delivered. Also, the title sequences for each episode were just incredible.

Ori is a very by-the-numbers Metroid game. There's a big map that holds many secrets hidden behind ability driven barriers. What sets Ori apart is the addition of challenging platforming that requires the occasional pixel perfect precision. I really enjoyed the difficulty of this game - it never felt too punishing and constantly brought to mind my experience with Super Meat Boy. The whole thing was wrapped in stunningly beautiful artwork that always looked great throughout, and the story, (while typical), ended on a wonderfully high note.

Undertale gives old school turn based RPG's a new twist by introducing an action to talk to the enemies instead of fighting them. This idea made the game such an enjoyable experience because almost every encounter was different in some way. During those encounters, a level of stress is introduced with oddly challenging bullet-hell segments that gave the player something to do during the enemy turn - an aspect I really appreciated and kept me engaged during what normally might get boring in other turn based games. The writing was smart and charming, with loveable characters that warmed my heart.

Many thought HM2 suffered by incorporating more puzzle elements (and more guns) instead of continuing the frantic, variable, melee-focused blood orgy seen in the first game. But in reality HM2 delivered another amazing soundtrack, a bigger emphasis on plot, and a more refined approach to level design. Moving the focus to more guns didn't bother me because I actually enjoyed taking a step back and determining my next move. That sounds sacrosanct to the genius of the first game, but if Dennaton had just done more of the same, I wouldn't have liked it as much. Stepping out of an elevator dual wielding SMGs right when Carpenter Brut's "Roller Mobster" hits with a heart-stopping blast of heavy synth will forever be one of my favorite moments in video games. 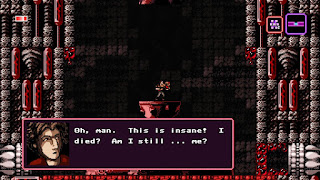 AV is the product of a single person who clearly loves Super Metroid. The player moves through static screens, slowly filling in a tiled map that hides secret upgrades that aren't immediately within reach. AV is special due to the oppressive sense of atmosphere. This world is a disorienting trip of fusions between flesh and machine with glimpses of a lost, highly developed civilization at every turn. The player is out of place, and this game brilliantly explains that by building a foreboding (while slightly confusing) narrative. Axiom Verge got under my skin so much that I was constantly thinking about it. If I wasn't playing, I was listening to the soundtrack or drawing imagery that I couldn't get out of my head. No other game this year had it's claws so deep in me and it will always be a special experience I'll never forget. 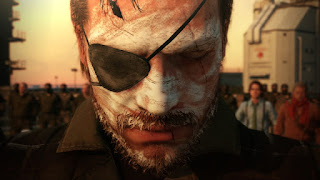 I'll try to keep this short: Phantom Pain ultimately comes down to gameplay in terms of my total enjoyment. I played the hell out of this game and got deep into the Forward Operating Base stuff for a period of time. I loved infiltrating other bases and stealing people's shit. Yeah, I was that guy who ruined your day - deal with it, this is war. The reason it was so compelling was because Kojima Productions just nailed the stealth and control of Snake. I felt like I could do anything and was never struggling to stay hidden or to even flee once discovered. Sandbox game design has a new benchmark to meet in future games. So the story? Yeah it kind of fell flat and what was there was a jumbled mess. I loved how it wrapped up, though, and some major story beats really hit hard for me. It's a divisive game, but what Metal Gear hasn't been?

I'm a big fan of the Witcher series, so much that Wild Hunt finally convinced me to read the books that the games are based upon.

Wild Hunt is the first (and last?) of the series to make the jump to a massive open world. Too many similar RPG's rely on useless collectibles and side quests that require the player to go fetch a thing, resulting in a huge map feeling empty and lifeless. Witcher 3 still has those things. But on top of that, it brings much more depth in terms of branching side quests with engaging characters and writing. The world of the Witcher is harsh - the land is constantly wracked with war, monsters lurk in every corner and there's whispers of an impending doom in the form of the Wild Hunt. Geralt's world feels so tangible even though it drips with fantasy tropes: grieving loved ones looking for their lost sons who rode off to war, jilted lovers that turn to dark magic to win back their partner, and humans that are more monstrous than literal beasts.

The game just sucked me in (more than the first two games) and I've talked at length about my love for it on the podcast. The gameplay left much to be desired, but that's not what I was looking for anyway. The way this game naturally fed optional quests to the player felt unique. A lot of it came from just experiencing the world or talking to NPC's, which went a long way in making me feel like I was living as Geralt. Riding your horse around the beautiful landscapes was a joy in itself. I adore the content of this universe, so I may be wearing rose-tinted glasses, but Witcher 3 is something special for fantasy fans that I feel has changed the course of how any forthcoming open world RPG's will be designed. At least, I hope other developers take note.