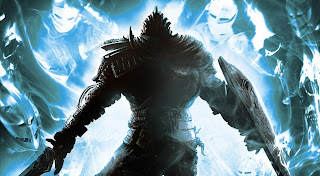 As promised in Episode 97, here is 2v1's "Dark Souls Primer." Note that Nick's applies mainly if you're starting with the original Dark Souls (DS1), and Alex takes a more all-encompassing approach to the Souls games in general.

- Plan ahead for stats, focusing on physical versus magic or vice versa
- Don't waste souls on resistance
- Endurance determines stamina bar and max equip load which affects dodging speed
- Be aware of "soft caps" refer to darksouls.wikidot.com
- Don't be afraid to use "souls of hollow, solider, hero, etc"
- Talk to every NPC until they repeat dialogue
- There is an NPC underneath firelink shrine who upgrades estus flask with "soul of firekeeper"
- Speaking of which, if there is a gold knight at firelink either kill him or read up on how he will affect your game
- You must be in human form to summon help for bosses/encounter special black phantom enemies that drop good items
- Consume "humanity" and "reverse hollowing" at fires to become human
- You can also use humanity to kindle bonfires to increase max number of estus flasks held
- The more humanity you're carrying at once increases item drop rate from enemies
- Purchase misc. boxes from vendor in undead burg that allow minor upgrading, repair and item storage at bonfires
- First major goal is mainlining to bells, sens fortress, anor londo and get lordvessel for fast travel
- The dragon outside undead chapel: you can shoot its tail with arrows (have a lot of them with you, there's no limit) to get a really powerful early game weapon, drake sword. the tail can be shot with no danger from below the bridge - Weapons have letter grades that scale with appropriate stat, increasing damage
- Don't be afraid to experiment with weapons
- There are multiple blacksmiths throughout the game, most often used is probably andre of astora who is located between sens fortress and undead chapel
- Give andre "embers" (check wikidot for locations) to allow for highest upgrading of weapons
- Physical focused weapons can be upgraded pretty high relatively early game
- There's a ton of different armors, be sure what you plan to use prior to upgrading
- It's a good idea to have a set of light armor with high resistances to poison/toxin that you can equip at any time (dont upgrade though)
- Bosses require patience and multiple attempts to learn attack patterns
- It's okay to summon help

I often tell people the Dark Souls franchise ruined video games for me because they set an impossible golden standard by which I measure just about all of my other gaming experiences. It's important to note, however, that different people play games different ways. Nick and I are a perfect example. We both revere the series, but we've both taken a completely different approach to them. So, I'll keep my advice narrowed down to three key points that made the games "work" so well for me. Let me know if they work for you!

1) Do your research.
You might as well stop reading past my number one suggestion if you're not willing to put in some time here. All of the Souls games are intricately designed, and all of your character attributes will serve slightly different purposes across all the games, including Demon's Souls. Your success in the games absolutely depends on your understanding of what the different attributes govern, how weapon and armor stats and bonuses work, and in many cases, reading about boss weaknesses. This will help you get an idea as to what sort of character you want to build and what you need to focus on to make that happen. There is no question you won't be able to find an answer to with all the online Wikis and forums at your fingertips. Use them!

2) Use a shield.
I can't emphasize this one enough. To me, the time you gain by holding a sturdy shield up (reduction to physical damage should be your first priority) is essential to studying and mastering your opponents. Overall, you'll die less, and you'll get the rewarding experience I describe in #3 below more often. There are lots of different aspects to shields, so if the entry in the series you're playing doesn't have a one-size-fits-all answer, be sure to keep two or three in your inventory for different combat scenarios. #1 above is important in choosing the right ones.

3) Respect "The Dance."
I know this sounds cheesy, but combat in the Souls games is basically dancing, especially when you use a weapon + shield character build. Patience is always the name of the game, but it applies doubly when it comes to wielding a shield effectively. In most cases, I'm gracefully circling my enemy with my shield raised up, blocking half of what's thrown at me and roll-evading the other half that's not blockable. This is usually done in one continuous direction around the enemy, and often times changing the direction is helpful. Sometimes an enemy seems to be almost "weaker" on one side than the other in terms of attack timing. This "dance" serves two purposes: It gives you the time and opportunity to become familiar with the enemy's moveset, and this subsequently teaches you the perfect time to strike between attacks. 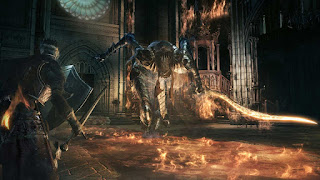 One final thought: Nick and I are here to help! We love and appreciate the fact that multiple people have told us they were hesitant to give Souls a shot, but after hearing us swoon about the games over and over, they've taken the plunge. Well, we won't leave you twisting in the wind if you run into some roadblocks along the way. Always feel free to email or Tweet at us. Tweeting is better for specific questions for one of us, and we can always continue the conversation by DM. Anyway, lots of luck, and Praise the Sun!